On Love and Loss

This has been one of those weeks that haunt me. One of those weeks that remind me that however hard I work, however much I care, however thoroughly I research, there are times when our beloved horses can not be saved. This is a hard thing to be reminded of, and worse now that my own once-in-a-lifetime horse is struggling with chronic health problems. I know that one day it might be him, and however much I love him, however hard I try, it may not be enough. Every horse I lose takes a sliver of my soul with them when they go. But when Brennir leaves me, he will take a big chunk of my heart and soul with him.

I sit here with my laptop on a warm June evening, and he is grazing beside me, cropping grass, happy and healthy again for now. For how long, I don’t know. The vet in me knows that I can’t by the will of my heart keep him here. He is on ulcer medication, Succeed, supplements, probiotics. Still, everything we can do isn’t always enough. These huge creatures we give our hearts to are incredibly, achingly fragile.

In the past week or so, we lost several patients. All of them had autopsies done at MSU. All of them had severe, unpredictable problems that were not fixable. One of them was a horse dear to my heart, a tough, spunky older horse full of what I call “pony power”, that indomitable spirit some small horses seem to have. He overcame incredible odds, beating severe colic, EPM, and a meniscal tear in his stifle over the past few years. To the end, he did things his way, and continued to go on rides with his owner in the sunshine, doing what he loved until he couldn’t anymore. No horse could have been more well loved, or had better care. On visits to the barn I would find his owner breaking alfalfa cubes into little flakes for him. He had dental problems that prevented him from eating hay, and the cubes were too big for him to chew easily, but he did not like pellets or mashes. So the owner would sit in the barn and break the cubes he liked into pieces small enough for him to handle, day in and day out.

We gave all we could to save him, but in the end his dental problems resulted in him accidentally aspirating feed into his lungs. Tough as he was, he did not show he was sick until the infection was very advanced. Despite IV medications and fluids, 24 hour care, and much devotion, he ultimately lost the fight. The owner was alone when he laid down and passed. She called me and I stayed on the phone with her, knowing he was dying, unwilling to let her face that grief all alone, when I from my battles with Brennir, know the hugeness of that grief.

The other horses I knew less well. One of them was a POA who became acutely, horribly ill. I did not know it as we tried desperately to save him that his intestines had ruptured, in a freak accident no one could have predicted. Feces and bacteria had already poured into his abdominal cavity, and he was dying of toxic shock. One of the staff at the barn asked me, while he was trembling and feverish and we were running boluses of iv fluids and banamine and muscle relaxants into his shaking body, “ Will he make it?”

The truth is, until they take their last breath, I have to believe the horse will make it. Until the last I try to keep my grip on them, holding them here with everything in me. When I lay out cold hard facts and statistics as I try to help owners decide what to do, as I had to for the third horse, who clearly had a small intestinal obstruction, and whose owners decided surgery was not a possibility, I try to guide people towards the best and most humane decision for them and their horse. Yet I never stop wanting to save them. I am sure I sound at times like the world’s worst pessimist, but until the end, I want to save them, even when I know they can not be saved. Even when, as for the horse with the small intestinal twist, who’s autopsy would reveal his stomach had already ruptured from the pressure built up from the obstruction, I know as I give the shot of euthanasia solution that I am lifting the horse from unimaginable suffering.

All this suffering was made worse by the illness of my own dear horse. The scientist in me knows the facts. He has had two trips to MSU for small intestinal problems in the last year. The odds are against us. Yet through his illnesses I have held him here, with all the strength within me. Every minute I have left with him is a gift. These cases remind me.

Even with the autopsy results telling me I could do no more than I did, the guilt is intense at times. Each horse in my care, I feel an elemental responsibility for. When I lose them, it is a failure so deep and personal it is hard to describe. At times, I feel I would give anything at all, to save all of them. But I can’t. So while I am with them I love them. I give them cookies, and kiss their noses, and tell them they are beautiful, even if I look like a fool, or as one irate client once said “ A goddamn pony kisser”. So be it. I will kiss them while they are here with me. You should too.

I'm a mobile equine vet with a special interest in lameness roaming the countryside helping out horses and their people.
View all posts by Whole Horse Vet Services »
« Previous post
Next post »

9 responses to “On Love and Loss” 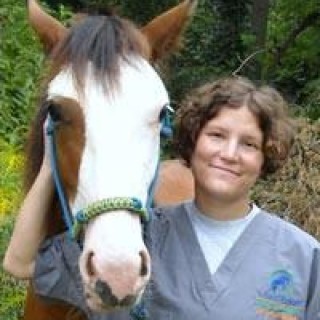 I'm a mobile equine vet with a special interest in lameness roaming the countryside helping out horses and their people.